By Joan Orr and Teresa Lewin

This is the second article in our series on how to teach a puppy not to bite.

Many bites to children occur around the food bowl. We are frequently told that the dog growls (but he would never bite of course) when the kids go near him while he’s eating. This situation is easily prevented if the puppy is taught that people approaching the food bowl means good things for the puppy.

The best way to prevent food guarding is to go up to the puppy while it is eating (adults only; not children at first) and toss something extra yummy near the food bowl. Progress to adding the treats right into the bowl. Children can toss treats towards the bowl once the puppy gets the idea that people approaching is a good thing. Soon the puppy will welcome the approach to his bowl with a wagging tail. If the dog raises his tail when a person approaches the food bowl, this is a serious warning. Watch out for this raised tail warning. Other signs that the dog is worried about people stealing his food include, blocking the food bowl by moving his body, growling, freezing and staring at the food or the person, or gobbling at an alarming rate. Recognize these warnings as an impending problem and go back to conditioning the dog to welcome approach by adding yummy treats once again.

This approach can be used to prevent other types of resource guarding as well. For example, if the puppy is lying on his mat chewing a bone, the kids can walk past and toss really yummy treats onto the dog’s mat. Similarly if the dog has a toy, the kids can toss treats in the direction of the dog and keep walking. The puppy will soon come to view any approach by a person as benign and will not become defensive.

Many people are of the unfounded belief that taking the bowl (or other high value object) away and giving it back is a way to teach the dog to accept this. Actually this teaches the dog to mistrust people coming near the bowl. The action that occurs immediately following the approach of the person is the taking of the desired object. Even if the object is subsequently returned, it is the taking away that becomes associated with the approach of a person. Using this approach could increase bite risk for children and visitors to the home since the dog will assume that any person intends to take his treasures and he may be less tolerant than with the ruling adult.

Another important lesson is the exchange. Obtain two identical bones or Kongs and stuff them with goodies and give one to the puppy. Take the second one and show it to the puppy right under his nose. When he focuses on the second one and starts licking it, take the first one away. Repeat several times per session by walking away and returning to make the exchange. The puppy will soon get the idea that people taking things away is a good thing. If a child ever takes from the dog the possibility of a bite is greatly reduced (children should still be taught not to take anything away from the dog, but best to be prepared in case it does happen). The exchange can also be used to regain stolen objects from the puppy. Instead of punishing the puppy, trade for something the puppy wants more and say “give” or “off” at the same time. The puppy will learn to give up objects willingly at the “give” command, thus reducing the likelihood of a tug-of-war happening between child and dog.

If resource guarding problems do develop despite your best efforts to prevent them, or the dog is an adult rather than a puppy, don’t delay, seek professional help from a trainer that will use positive methods to solve the problem. Remember, it is critical that the puppy or dog learn that it is a VERY GOOD thing when people come near. Any training approach that involves punishing, startling or frightening the puppy to distract him from growling will make things worse. Never punish a puppy for growling, or allow others to do this. The puppy may learn not to growl and may go straight to a bite the next time, or when you are not there to mete out the discipline. The puppy may become even more worried about kids around his food or toys if bad things happen in the presence of kids.

Resource guarding can develop into a very dangerous situation – a ticking time bomb – with a tragic outcome becoming more and more likely as time goes on.

This site uses Akismet to reduce spam. Learn how your comment data is processed. 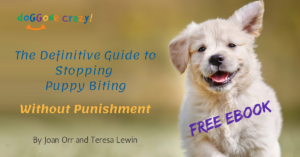